The European Space Agency has stated that 3D printing a moon base is possible within the next 40 years, and is looking into developing the project, which is still in its planning phase, further.

3D Printing: one of the first exported skills from Earth! 🙂 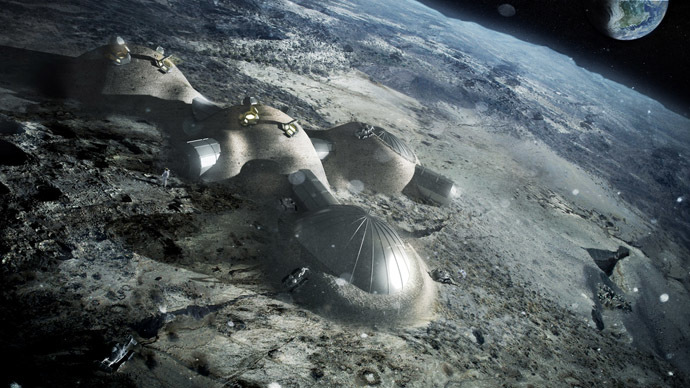 3D-print a moonbase? No problem for our robots, says European Space Agency (VIDEO)
he European Space Agency (ESA) has proven that its project to 3D-print a base on the Moon is possible. In a latest video the agency shows how 3D-printing robots may be used to build the base using lunar material.
The ESA started investigation of the lunar base possibility in 2013, working alongside its industrial and architectural partners. The creation of the reliable semi-spherical structures on the surface of the moon could be fulfilled within the next 40 years, and 90 percent of the materials needed would be derived from the moon itself.

The latest details of the new concept, which is, however, still “firmly on the drawing board,” were discussed at a conference this week at ESA’s technical center in Noordwijk, the Netherlands.

“The new possibilities this work opens up can then be considered by international space agencies as part of the current development of a common exploration strategy,” he said.

As planned, the location of the settlement would be at the “peak of eternal light” – that is, along the rim of the Shackleton Crater on the south pole of the moon. This location was also chosen previously by NASA for its intended human settlement base, as it would mean near-constant solar power.

The structure of a living pod would be formed by the habitation capsule and a dome, which would be covered by a protective shell made of lunar dust “cement” by two 3D-printing robots. It will be vital to protect people – up to four astronauts would become the first moon settlers – from radiation, meteoroids and temperature jumps – functions that on Earth are carried out by the atmosphere.

The moonbase plans are by no means the first attempt to apply 3D-printing to space technologies. This September, the International Space Station welcomed a high-tech 3D printer, aimed at creating tools and supplies for astronauts.