A brief history of 3D printing

On that evening, more than three decades ago, when he invented 3D printing, Chuck Hull called his wife.

She was already in her pyjamas, but he insisted that she drive to his lab to see the small, black plastic cup that he had just produced after 45 minutes of printing.

It was March 19, 1983. Hull was then an engineer working at a U.S. firm that coated furniture with a hard plastic veneer. As part of his work, he used photopolymers — acrylic-based liquids — that would solidify under ultraviolet light. Hull thought the same sort of process might be used to build a three-dimensional object from many thin layers of acrylic, hardened one after another, with targeted UV light from a laser beam.

Hull pursued his research on nights and weekends until finally sharing his eureka moment with his wife, Anntionette.

Hull took out a series of patents on his invention and went on to co-found a company, 3D Systems, that remains a leader in the field. Last year, the 75-year-old was inducted into the National Inventors Hall of Fame.

Hull’s invention launched a wave of innovation. Design engineers embraced 3D printers as the answer to their prayers: Instead of waiting weeks or months to have new parts produced, they could design them on computers and print prototypes the same day.

3D printers have since evolved and can now use all kinds of materials, including metals, ceramics, sugar, rubbers, plastics, chemicals, wax and living cells. It means designers can progress rapidly from concept to final product.

Advances in the printers’ speed, accuracy and versatility have made them attractive to researchers, profit-making firms and even do-it-yourselfers.

The cost of the machines has also dropped dramatically, which means it’s easy for home inventors to enter the field. Home Depot sells a desktop version for $1,699 while Amazon.com markets the DaVinci Junior 3D printer for $339.

The wave of innovation triggered by the 3D printer is only now beginning to crest in the field of medicine. Researchers are racing to engineer implantable livers, kidneys and other body parts with the help of 3D printers.

In Canada, scientists are using 3D bioprinters as they work toward creating new limb joints made from a patient’s own tissue, and implantable skin for burn victims.

3D printing, a technology still in search of a market, may have just found a home in the world of medicine. The US Food and Drug Administration approved an epilepsy medicine called Spritam that is made by 3D printers, making it the first 3D-printed product that the FDA has approved for use inside the human body.

Aprecia, the pharmaceutical company behind Spritam, says that its new type of tablet is made by 3D-printing layers of the powdered drug, binding the layers of powder together, and then blowing away the excess powder. The drug’s unique structure allows it to dissolve considerably faster than the average pill, which as the news site 3DPrint points out is a boon to seizure sufferers who often are prescribed large, hard-to-swallow pills. Aprecia also says 3D printing will allow doctors to know that the medicine they’re prescribing delivers the exact dose intended, as each pill will be completely uniform.

This could prove to be an important step for integrating 3D printing more deeply into the US health system. Doctors in the US already use a government-sponsored 3D-printing repository to share tool designs to aid in surgeries and treatments; now scientists are working on 3D-printed tracheas and bones, as well as ears, kidneys and skin—which could one day help cover the massive shortage in donor organs.

While the quick-dissolving Spritam tablet is a world away from 3D-printed organs and body parts, its approval shows that the FDA thinks certain 3D-printed materials are safe for human consumption.

Rather like 3D printing itself, this drug could be the base layer the technology slowly builds upon, perhaps generating future medical innovations.

It said the printed skin would be used in product tests.

Organovo has already made headlines with claims that it can 3D-print a human liver but this is its first tie-up with the cosmetics industry.

Experts said the science might be legitimate but questioned why a beauty firm would want to print skin.

Its statement explaining the advantage of printing skin, offered little detail: “Our partnership will not only bring about new advanced in vitro methods for evaluating product safety and performance, but the potential for where this new field of technology and research can take us is boundless.” 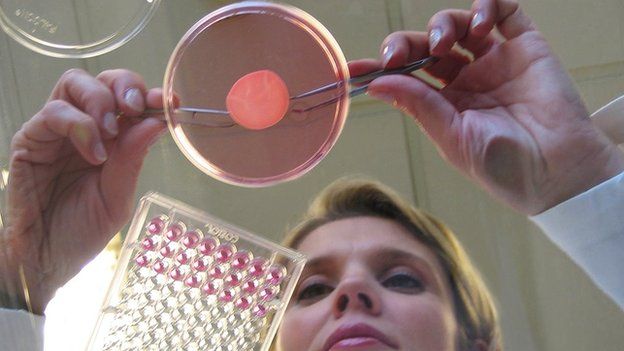 It also gave no timeframe for when printed samples would be available, saying it was in “early stage research”.

Experts were divided about the plans.

“I can understand why you would do it for severe burns or trauma but I have no idea what the cosmetic industry will do with it,” he added.

The Wake Forest Institute for Regenerative Medicine has pioneered the field of laboratory-grown and printed organs.

It prints human cells in hydrogel-based scaffolds. The lab-engineered organs are placed on a 2in (5cm) chip and linked together with a blood substitute which keeps the cells alive.

Organovo uses a slightly different method, which allows for the direct assembly of 3D tissues without the need for a scaffold.

It is one of the first companies to offer commercially available 3D-printed human organs.

Last year, it announced that its 3D-printed liver tissue was commercially available, although some experts were cautious about what it had achieved.

“It was unclear how liver-like the liver structures were,” said Alan Faulkner-Jones, a bioengineering research scientist at Heriot Watt university.

Printing skin could be a different proposition, he thinks.

“Skin is quite easy to print because it is a layered structure,” he told the BBC.

“The advantages for the cosmetics industry would be that it doesn’t have to test products on animals and will get a better response from human skin.”

But printed skin has more value in a medical scenario, he thinks.

“It would be a great thing to have stores of spare skins for burn victims.”

3D Printing may replace skin grafting for burn victims in the future! Check out how by following the link below 🙂

TORONTO – Dr. Marc Jeschke, the head of one of Canada’s largest burn treatment centers, had to admit the 3D skin printer in his hands didn’t look revolutionary.

“I actually find it kind of fish-tanky,” he told CBS News, laughing. But this boxy prototype could change the way burns are treated, from current skin grafting methods Jeschke calls “barbaric” to a process his team believes will be faster, cheaper and easier on the patient, with an end result — functional human skin — promising to be just like the real thing.

“It’s cutting edge,” said Jeschke, the director ofRoss Tilley Burn Centre at Sunnybrook Health Sciences Centre in Toronto, whose team developed the process and printer in collaboration with researchers from the University of Toronto. “We can mimic how your skin looks. And that’s the evolvement, that’s something new, that’s something novel.”

To begin the process of creating new human skinon the printer, Jeschke explained that healthy skin cells are first harvested from the burn patient, then analyzed and multiplied in the lab.

“We grow these cells in various containers and make them exactly into the cell type that we want,” said Jeschke. Then, “the printer tells the cells where to go.”

It does so via a cartridge, which weaves the cells together with a gel-like matrix serving as the skin’s 3D scaffolding. The cellular tapestry that emerges from the cartridge floats through the printer’s reservoir and gathers around a rotating drum. The strips are then collected and cultured.

“You basically imprint your various cells into this three-dimensional matrix that comes out and it’s basically ready to be put on the patient,” said Jeschke.

The printer is still in preclinical trials, but Jeschke’s team said they hope to move to human trials within two years, and if those go well, printers like these could be in hospitals and helping burn patients within five years.

But to get there, Jeschke said the project will need more funding. In September, members of the team were selected as the Canadian winners of the 2014 James Dyson Award, a prestigious international engineering prize that comes with cash, but only a fraction of what it will cost to get the project across the finish line.

And there are other questions that still need to be answered.

Growing enough cells remains a challenge. “That’s the current issue, which is how to get cells to magnify, multiply and grow in a speed that’s beyond what they normally do,” Jeschke said.

Should they succeed, they’ll help change a process Jeschke said is in dire need of an upgrade. Current skin grafts for burn victims require removing a healthy section of a patient’s skin to cover their wound, essentially creating a second wound in the process. The greater percentage of the body that’s burned, the more skin that’s needed — and the less that’s available. Skin removed for these grafts can be expanded, but not by much.

“Your donor site, once you take the skin, of course has to heal,” explained Jeschke. “So a patient with 40 percent burn or 50 percent burn is usually in a hospital about 80 to 100 days.”

With their printer, Jeschke and his team think they can cut that recovery time down significantly. And while other methods can leave patients with skin that doesn’t match their natural color, or lacks follicles or sweat glands, researchers on the project say their method will allow them to eventually add those complex layers of cells.

“Someone will be able to take their own cells, and incorporate it into this printer and have skin graft printed that are made especially for them,” said Lian Leng, a PhD student at the the University of Toronto’s Department of Mechanical Engineering and one of the lead developers of the printer, commercially known as the PrintAlive Bioprinter.

The printer could have a critical impact in underdeveloped countries, where even a small burn can be fatal. Researchers on the project plan to train doctors in Cambodia to grow cells and operate the printer themselves.

Such a device could also provide critical support to soldiers burned on the battlefield. That’s prompting the U.S. military to fund similar projects, like one at Wake Forest University in North Carolina.

“You probably can reduce war fatalities significantly if you have an off-the-shelf skin product that can be put on,” said Jeschke.

Leng agreed with Jeschke’s assessment of the printer’s looks — “It really is a mini version of a fish tank.”

It’s a fish tank, though, that could eventually save lives.