Recycling Plastic Waste & 3D Print Fails Into Filament: The Cruncher
Any time I’ve seen a new technology meant to bring 3D printing to the masses, my initial response has been: “Do we really need more low-quality plastic crap in our houses?” But I’m excited by rapid prototyping as a much less materially intensive way to design and redesign products, and experiments in the healthcare sector, such as printing replacement organs, are awfully cool. But, of course, all of that testing out and experimenting will involve failures — should those bad prints just go to the landfill? Not if startup Extrusionbot has its way. I originally published the following post at sustainablog on February 6th, 2015.

I’m still not sold on the idea that 3D printing is a useful consumer-level technology, but it’s definitely got its uses for designers and researchers. Regardless of who’s using the technology, though, there will be failures. With 2D printing, you can just throw the paper into a recycling bin. With 3D printing, the type of resin used, and the ability to break it down in a useful manner, determines recyclability. And using recycable plastic in the first place makes for a greener process overall.

So, I was intrigued when I came across a press release for The Cruncher, a machine designed to recycle 3D printing fails, or prints that are no longer useful. Created by Extrusionbot, a company that launched its signature EB2 filament extruder through a successful Kickstarter campaign. The new device will work right alongside the earlier product, but can also work with other extruders. In short, The Cruncher breaks down prints and other plastic materials that makes them ready for reuse.

If this just addressed the issue of 3d printing waste, The Cruncher would be a good thing, but fairly limited in its impact. But in addition to turning existing prints and prototypes back into usable plastic pellets, The Cruncher can also process other plastics, like used bottles and other waste materials. That’s kind of exciting… still limited in terms of impact, but conceptually promising. Why not use plastic waste that may well end up in landfills or oceans otherwise?

I’m pretty sure this one’s going to hit its funding goal: it’s already well on the way. It’s clearly designed for use beyond the consumer audience. I like the idea of reuse and recycling as an integral part of 3d printing, and hope not only that this campaign succeeds, but the concept catches on in the niche.

Work with 3D printing? Would a product like this help your efforts? Share your thoughts with us… 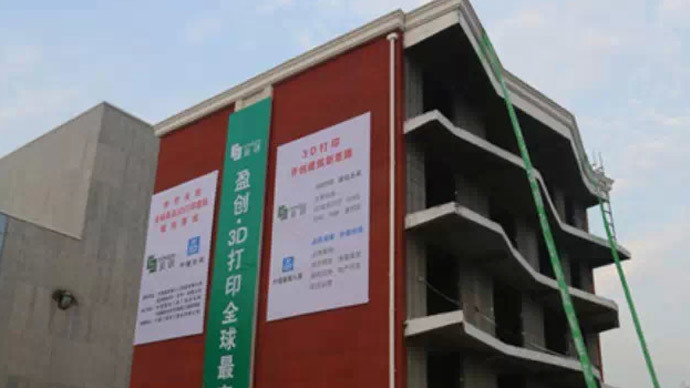 Chinese firm 3D prints 5 story house using construction waste
A Chinese company has used 3D printers to create five-story homes using construction waste. The project architects say this is the world’s tallest building constructed using this technology.
The new project is the brainchild of Shanghai-based WinSun Decoration Design Engineering Co, who also managed to use 3D printing technology to create a 1,100 square meters villa in the Suzhou industrial park of China’s Jiangsu Province. It is not known how comfortable the buildings will be to live in, but one cannot argue with the cost, the villa complete with interior decoration cost a little over $160,000.

According to the 3D printing website 3ders.org, it took the company a day to print one level of the building and another five to put it together. In order to undertake the mammoth task, the company used a massive 150-meter long and 6 meter high printer. They use recycled building waste for the materials or ‘ink’ which also contain glass fiber, steel and cement and special additives. The process works by secreting layers of construction material on top of each other to create densely packed building blocks.

The company says the buildings are perfectly safe to live in, and are expanding their horizons and hope to build housing blocks as tall as 12 stories in the future.

WinSun estimates 3D printing technology can be very savvy: it may save between 30 and 60 percent on building materials with costs slashed by 50 percent up to 80 percent. The firm said that it may also shorten production time by 50 to 70 percent.

The company has been building up a reputation. In April, it managed to print 10 full-size houses in a day.

From discarded plastic bottles to 3D printing filament; the industry provides yet another outlet for sustainable recycling! 🙂

Global warming, chemical and physical pollution and other environmental issues are no longer the far removed issues they once used to be. The world is changing quickly as a result of human life and people are finally starting to take note. In contrast to life fifty years ago, environmental issues have become such potential imminent threats that it seems everyone has a general awareness of their existence.

Companies are now morally obligated to conduct environmentally friendly business practices and include them in their code of ethics. Whether by recycling or using energy-saving electricity, everyone seems to be doing something to lessen the carbon footprint.

3D printing and the environment

3D printing has garnered some negative attention for the amount of plastic it wastes. To combat this many companies have attempted to reduce the environmental harm caused by 3D printing. There are companies like ProtoPrint and The Plastic Bank who kill two birds with one stone by employing underprivileged people to pick up and sort through plastic waste that is then converted into 3D printer filament. There are also people trying to steer away from plastic completely, like researchers at the Italian Institute of Technology who are developing a way to produce printer filament from foods like spinach, cocoa and rice.

Leading 3D printer manufacturer 3D Systems even made a 3D printer called the Ekocycle that extrudes recycled plastic bottles and uses them as filament to build products. Now, a team of designers has followed suit and created a 3D printer that has an automatic built-in plastic waste extruder.

Designers Yangzi Qin, Yingting Wang, Luckas Fischer and Hanying Xie have created what they call the 3D Re-printer. The machine works by recycling plastic bottles and converting it into raw material for 3D printing. The 3D Re-printer isn’t publicly released yet and there isn’t much information available online, but the designers revealed details of its basic functions.

“Plastic products and waste material are part of our daily lives, be it at home, in school or the office,” writes the team on itsdesign concept photo. “We don’t know where to put most of these products, or feel that it is such a waste. The quantity of plastic waste is constantly rising and thus affecting our lives in the future and causing damage to the environment due to huge landfills and the long time it takes to degrade. In addition it affects the overall beauty of our cities by creating “visual pollution.” 3D-Reprinter is a device design that allows the user to recycle the home waste plastic bottles into new products.”

From the little available information on the 3D Re-printer, it seems almost identical in functionality to 3D Systems’ $1,199Ekocycle. The 3D Re-printer doesn’t have a listed price tag yet, but if its designers choose to sell it for a relatively reasonable cost then it may be worth looking into.