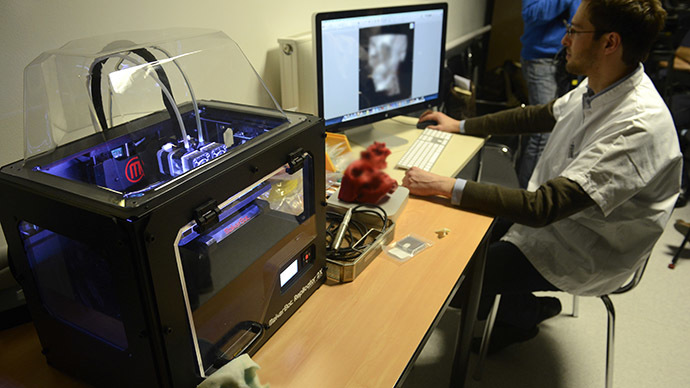 3D printing drugs – New technology to revolutionize medical industry
Scientists believe they have come up with a way to print drugs, using a 3D printer. They say they can create a capsule, which can be swallowed, and it will also allow doctors to alter a dosage according to the specific requirements.

A team of researchers, from the Louisiana Tech University, believes they have come up with a solution to find a biodegradable material, which could be used to contain everyday drugs, as well as chemotherapeutic compounds for those needing cancer treatments. The 3D printer would be able to create the capsule, meaning that medicine only needs to be inserted before it is sealed, Science Daily reports.

“After identifying the usefulness of the 3D printers, we realized there was an opportunity for rapid prototyping using this fabrication method,” said Jeffery Weisman, who is a doctoral student in Louisiana Tech’s biomedical engineering program.“Through the addition of nanoparticles and/or other additives, this technology becomes much more viable using a common 3D printing material that is already biocompatible. The material can be loaded with antibiotics or other medicinal compounds, and the implant can be naturally broken down by the body over time.”

Weisman believes that one of great advantages of the new technology will be its ability to tailor the contents of a drug for particular needs. This could mean a dose of antibiotics could be made stronger or weaker, depending on the requirements of the patient. It would also mean hospitals or pharmacies would not have to wait for deliveries from pharmaceutical companies. As long as they have the drug in question, they can create the dosage in the medical facility, or drug store.

“One of the greatest benefits of this technology is that it can be done using any consumer printer and can be used anywhere in the world,” Weisman said.

Dr. David K. Mills, who is a professor of biological sciences, also added that there are other uses that 3D printers could have in the medical industry. The vast majority of antibiotic implants, which are put inside someone undergoing an operation to ensure there is no risk of infection are made out of bone cements. Bone cements, which are normally used to anchor joints, such as a hip or knee, have to be mixed by the surgeon and are non-biodegradable, meaning the implant has to be removed once the operation has been completed. The researchers now believe that these antibiotic implants can be made out of bio-plastics, which can be broken down by the body, thus meaning no additional surgery is needed.

“Currently, embedding of additives in plastic requires industrial-scale facilities to ensure proper dispersion throughout the extruded plastic,” explains Mills. “Our method enables dispersion on a tabletop scale, allowing researchers to easily customize additives to the desired levels. There are not even any industrial processes for antibiotics or special drug delivery as injection molding currently focuses more on colorants and cosmetic properties.”

So far 3D printers have been used to create the outer shells for devices such as hearing aids. Phil Reeves, who is an expert in the 3D printing industry, says that there are currently around 10 million hearing aids in circulation and that this is a conservative estimate, according to Forbes.

The great advantage of using a 3D-printed hearing aid is that it gives the user much greater comfort, as it can be adjusted to the exact measurements required. This would simply not be possible if it was mass produced in a factory.

Meanwhile, in February 2012, the BBC reported how a woman in the Netherlands was given a replacement jaw, made out of titanium powder, which had been created by a 3D printer.

Layerwise, the company who helped design the product said:

“Once we received the 3D digital design, the part was split up automatically into 2D layers and then we sent those cross sections to the printing machine,” the company added.